Episode 6: Breaking Down the Agoge Methodology & How To Engage at Events 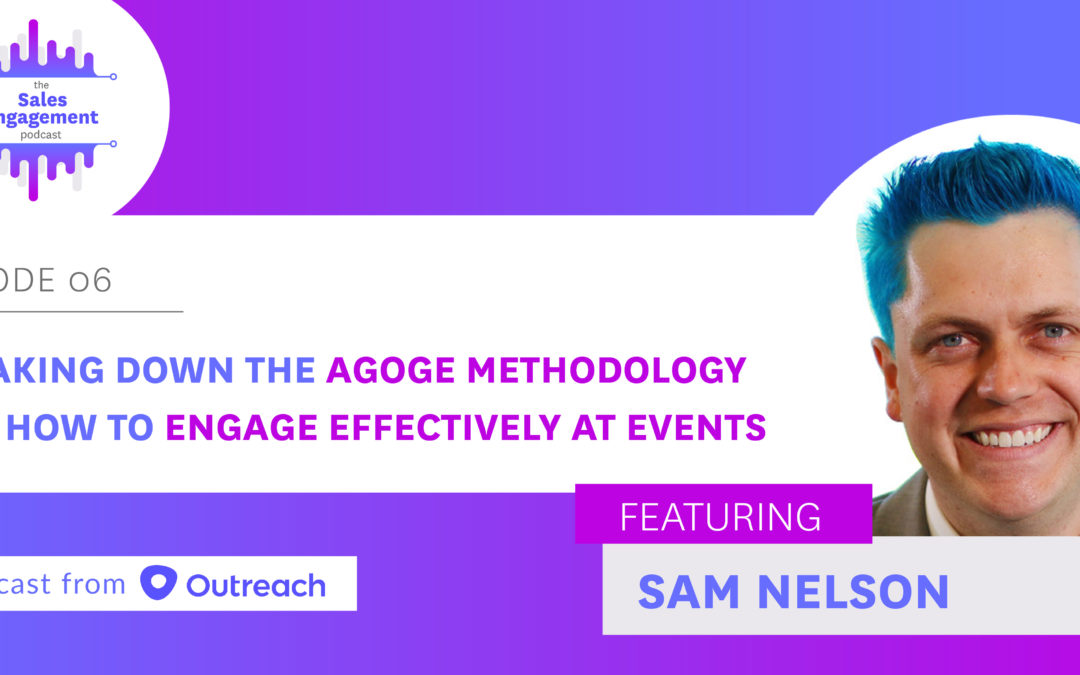 Breaking Down the Agoge Methodology & How to Engage Effectively at Events

Training new reps can be a drag.

So can networking at events. Nobody ever follows up or reaches back out.

If you’re looking for out of the box, insanely effective ways to train your new SDRs and stand out at events, you’re going to love this.

In a recent conversation with Sam Nelson, SDR Agoge Leader at Outreach, he gives us incredible insight into the beauty of the Agoge methodology.

Get ready to learn Spartan tactics for your training your new SDRs, as well as learning extremely effective tips for engaging well, and memorably, at events.

What is the Agoge tribe

Sparta came up with it.

When new recruits would come up to join the warriors, they would all be put into one group. This one group was called the Agoge.

This is the concept Sam uses when training all of the new reps.

Traditionally when bringing on new SDRs, they’re under one SDR manager who has 500 other SDRs to worry about.

Using the Agoge method, all new SDRs are in one group under one manager who specializes in issues with new reps.

This can drastically increase capacity with new reps because you can solely focus on those issues. It removes all of the other stuff and allows the manager to focus 100% on making the new reps successful.

Focusing on new reps the first few months is actually a lot of fun.

They’re new and all pumped up to be getting started.

Having all of that energy on a team is super motivating. After all, a successful team is a happy team.

New SDRs are awesome because they are open to new ideas and concepts. They’re fresh slates which makes them the best for drilling down the best practices.

The Agoge team is a great incubator for new processes and ideas.

When you have an Agoge, it’s much easier to implement new processes that you know are going to make the team better.

You can bring in the new practices and see that they do well, and then the rest of the team will come in and want to take it on themselves to implement the new processes.

If you bring on enough reps to form a decent sized team, volunteer to be the Agoge. Leader.

It’s the most fun job in town.

If you have new ideas to implement, you can have them going in 30 days.

They get excited about things and it’s fun.

Worried because you don’t have a big team? Stop worrying.

If you don’t have a large team, you have an edge.

The whole reason that Agoge is a big deal for big teams is that once you have a huge sales team, new changes are really hard to implement.

The Agoge is a way for you to do that.

But for small teams, you focus in on the brand new reps and you can have the exact same strategy.

It’ll just be easier implementing new practices for your team.

Origins of the methodology

Besides learning from the greatest warriors in Rome… Sam was in college going to class. At first.

Then he noticed a problem. The instructor, or the expert, was living and breathing their area of study. Say, calculus.

However, there was an issue with how information was being conveyed. The problem was that the instructor hadn’t gone from knowing nothing to knowing everything about calculus.

This problem was solved by Sam going to the TA lab instead of class. It was a more efficient way to learn.

The Agoge is being trained by the Agoge.

Learning nothing to learning something.

Sending an SDR to an event sounds like a bad idea. But it’s a great idea.

Not many people are doing it so there’s your first advantage right there.

Why isn’t anyone doing it?

It’s a good idea that sounds like a bad idea.

But, it’s a good idea because SDRs are natural booth hustlers.

Their job is to hustle. At events, they have an opportunity to have on demand conversations whenever they want.

Another tactic is prepping before hand.

Look at organizations that will be there, or guess who is going to be there if that information isn’t available.

If you can get a list of people who actually have booths, take that list. Discover the highest ranked person who will be there.

Find a map of the event so that when you’re there, you know where everyone is and a name to go to at each place.

It’s alright to have a few meetings before.

But the meat of it is doing your research before you get there, and then going in and talking to people at the right times.

It’s easy to feel overwhelmed at an event.

Here are a few tips on networking effectively.

When you’re booth hustling, go at the right time. The “right” time is when salespeople are standing around awkwardly.

Not when they’re at max capacity.

All you have to do is walk by and they’ll talk to you. They’ll engage you.

You don’t need a dazzling opening line. They’ll start it for you.

Give them a brief overview of what you do and how it relates to them.

Then ask for the decision maker so you can get a meeting. It evolves like a natural conversation.

And the best part is, they can’t hang up on you.

If you’re on booth duty, be proactive.

Just be comfortable with being uncomfortable. It’s easy to hide behind screens. Talking face to face can be hard.

You may think the hardest part of the SDR position is the follow up.

It’s actually getting the first initial attention. If you talk to someone at a show, you already have that going for you.

After an event, wait a week and a half before you send up your follow up email.

Whoever you talked to is probably getting barraged with emails during the first few days following an event. Yours will get lost in the mix.

Take notes on the conversations you have with people. Get those notes in the first line of your email and jog their memory.

Another fun way to differentiate yourself is to go trick or treating for swag.

Take a picture with that swag and send it in your follow up email. They’re not used to it.

Also, don’t bring business cards. They won’t use them to get back to you. It’s a cop out.

You want to get their business card or their number. The ball gets put in your court.

A final tip for engaging more effectively (online or offline)  is to stay on your toes. If it worked 3 months ago, it won’t work anymore.

The sales world is always changing. As soon as you catch up, it stops working.

Always be looking for new tactics to stand out.