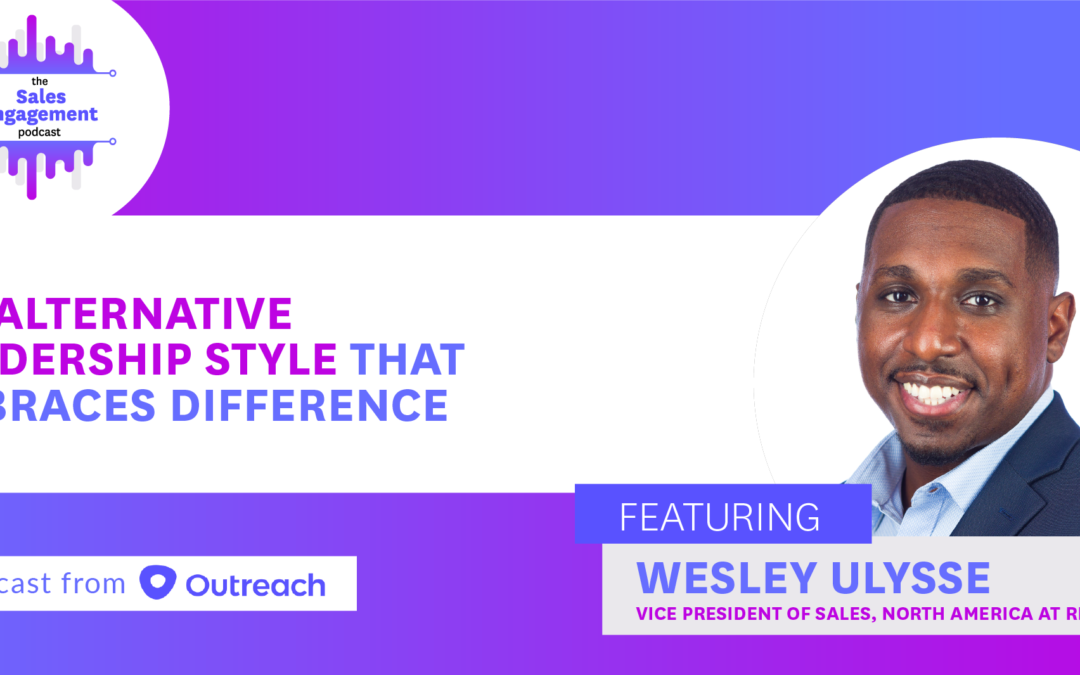 You have a big problem if your VP of Sales is the best salesperson in the company. Their job is actually to help make their teams better than they ever were as individual contributors.

Let’s dive into why open-mindedness can be the biggest leadership challenge, the reason your VP of Sales shouldn’t be the top seller, how an open-minded manager interviews and hires, and the most important quality a manager can have.

Leaders who are open-minded

Wesley comes from a nontraditional sales background (he called himself an unhappy accountant for the New York City Ballet).

As a person with an immigrant background, he believed that he needed to become a doctor, lawyer, or businessman — without necessarily understanding what the business role would require.

Open-mindedness starts with hiring. When you’re not necessarily hiring the quintessential salesperson or team member, your goal is to have the patience to find the right fit.

When hiring, Wesley looks more at people’s qualities and goals for growth and less at whether they appear to be the proverbial perfect salesperson since he didn’t fit that mold, either.

Beyond hiring, an open-minded leader also ensures that the team environment remains inclusive.

That comes with open dialogue.

“People need to feel as if they can express their concerns. But more importantly, when they do that, they need to see the impact,” Wesley explained.

Team members care about how their suggestions are acted on! An open-minded leader invites team members to build a business alongside them.

The true role of a sales leader

News flash: Sales leaders who think they should be the best salesperson in the company are wrong.

In fact, it’s a huge problem if the VP of Sales is the top seller. “My job is supposed to be helping those get better than I ever was and helping build careers,” Wesley said.

His team comes to him and asks what they should do in a given situation. Wesley answers with his thoughts, of course, but then turns the question right back around.

What do you think you should do? Very often, his team has ideas or suggestions that are better than his.

“I try to empower my team to trust their gut and be confident in their approaches,” he added.

Another example Wesley gave had to do with the origin of his own leadership style. In his first month as an SDR, his manager sought him out for a conversation because, frankly, he was failing.

She asked him what he needed, and he said he needed to be left alone to figure things out.

And — get this! — she left him alone, and he figured things out.

Wesley’s manager didn’t categorize him one way or another. She didn’t tell him what he had to do but rather asked him how he wanted to fulfill the role.

Everyone is different and deserves to be managed individually.

“I like to remain dynamic. I like to remain open-minded, but also let people figure it out and be themselves in the role, not necessarily follow a formula. That really shaped my management style,” Wesley said.

In a practical application of this idea, whenever Wesley shares resources like email templates, he encourages his team to make it their own, to deviate from the norm, and to stand out.

The most important quality a manager can have is vulnerability, according to Wesley.

“I’m on my own journey as well,” Wesley said.

Two of the challenges facing sales leaders in the short term are definitely hiring through the talent shortage and the perhaps more unexpected team spirit.

Growing and maintaining team spirit in a hybrid environment, particularly in sales, which is traditionally such a money-driven, individualistic professional.

Wesley, however, wants to foster a team spirit despite working from home and work/life balance challenges because togetherness matters to us as human beings.

A new hire talks to everyone else on the team more than to Wesley because he wants to create an inclusive environment for them to grow together and to show them that their most important relationships are not with their boss but with each other.

Get in touch with Wesley on LinkedIn.

For more engaging sales conversations, subscribe to The Sales Engagement Podcast on Apple Podcasts, Spotify, or our website.