Episode 129: Amazon Partnered With Him. Here’s His 3 Sales Lessons 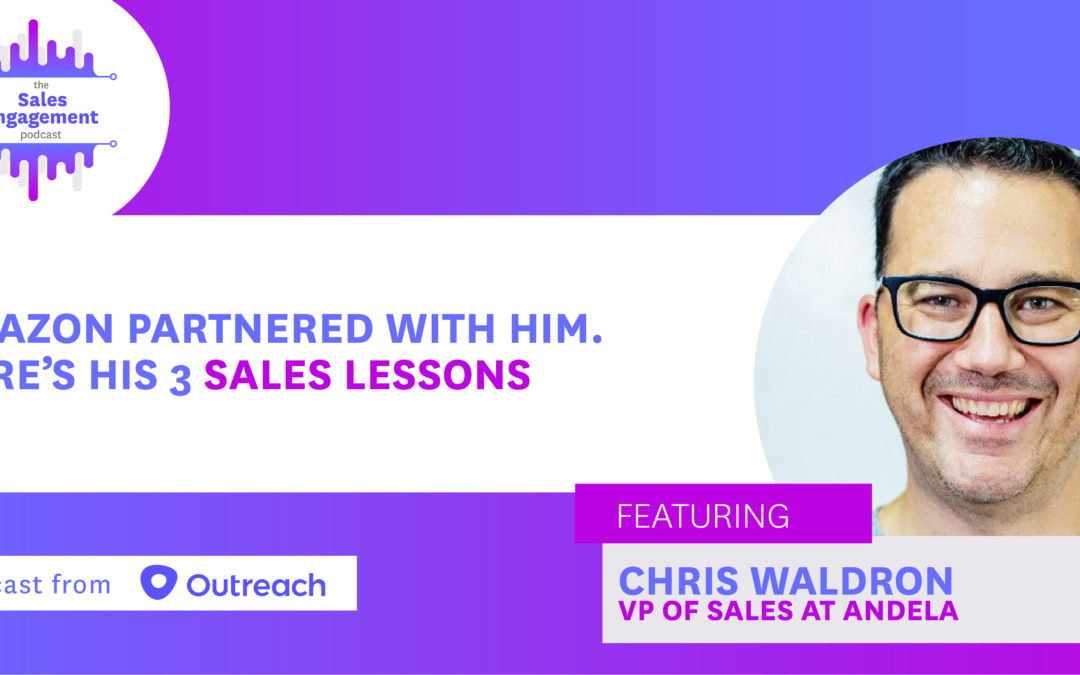 Amazon Partnered With Him. Here’s His 3 Sales Lessons

Chris saw a flyer this flyer on his car:

As a freshman paying his own through college, Chris believed it.

He signed up to start selling Cutco knives door-to-door, which launched his career into sales. Along the way, he became the first manager in Vector Marketing’s history to win President’s Club. Later, he moved to California, became a GM for Access Nurses, then founded TakeLessons.com, who partnered with Amazon, and, now, he’s the VP of Sales at Andela.

We invited him on The Sales Engagement Podcast to share what the top sales lessons he’s learned along his dazzling sales career:

Chris was never scared of asking for referrals. Early on, he realized that for him to achieve the numbers he wanted, he’d need more referrals than anyone else on the team.

As he knocked on doors selling knives, he developed a standard process when he would make a sale: As he was walking out the door and shaking hands with his new customer, he’d say:

“Hey, 1 more thing. Would you mind walking me next door to your neighbor and introducing me?”

If the sale was especially good, he’d even ask if they could get out their phone book and go down the list, line by line, to give him referrals.

This process of “one more thing” served him well — he became a top 10 sales rep, and was promoted to running a district office by his senior year in college

Chris had a major setback when he first started selling knives. Everyone else said to first sell to your family and friends, so Chris took their advice.

After everyone else came back from Christmas break and described their family sales, Chris had almost nothing to show for it.

Grandpa: “I’ll buy this incredibly-cheap option you have, just because I love you.”

Chris didn’t stop though — he just realized that he would need to knock on more doors to get more at-bats, and he would need more referrals to achieve the same success as everyone else. He self-diagnosed.

3) It’s not just about your process, your product. It’s about them

We fall into this trap as as sales people: we have our 3 top value props, because we’ve found that those issues are generally the most effective selling points with customers. But we must remember that the customer’s pain is not always the pain we typically diagnose.

Here’s a couple ways Chris illustrated that we must always keep our focus on the client’s issues, not our product:

Before Chris exited from TakeLessons.com, he struck up a deal with Amazon. In those days, Amazon was just setting up their services sector, and Chris wanted to get in on their eagerness.

Chris started with: “Why would Amazon take a meeting with us?”

Instead of just assuming that Chris’s selling point to Amazon would be what he always touted, he dug into Amazon’s values. After doing plenty of research, he discovered that Amazon was really all about learning from each new industry. He realized that Amazon probably didn’t care as much about the revenue — because the $1MM to $5MM they’d gain was a small amount for them — but, what Amazon did care about was learning about the services industry as quickly as possible

So, when Chris pitched Amazon, he focused on the education piece, and what they would learn by taking advantage of TakeLessons’ expertise.

It worked — He closed the partnership.

Loss: At Access Nurses, it took him 4 months to sell 1 deal

By the time Chris left Vector (where he was selling the Cutco knives), he I was the top 1 to 3 managers in the country every year, but wanted a taste of the West Coast. So, he moved to California and started selling for Access Nurses.

He had a solid sales process, and knew exactly what he was doing.

In fact, it took 4 months before Chris closed a single deal with Access Nurses. “I was literally the worst performing AE, ever, in the history of the company.”  That was pretty low spot for someone used to crushing it in sales. But of course, Chris didn’t give up.

He realized the problem was that he had a solid process that depended on what he assumed was the value prop of Access Nurses. His selling technique was not focused on what their clients wanted. Chris sat under the company’s top-performing sales person, self-diagnosed, and changed his process according to what he realized the main pain points their service was solving for their customers.

The lesson in both the Amazon case & Access Nurses is the same:

To hear this episode, and many more like it, you can subscribe to The Sales Engagement Podcast on Apple Podcasts, on Spotify, or on our website.