Episode 111: Conversion Metrics: What Are They, and How Will They Help You Hire Better Reps? 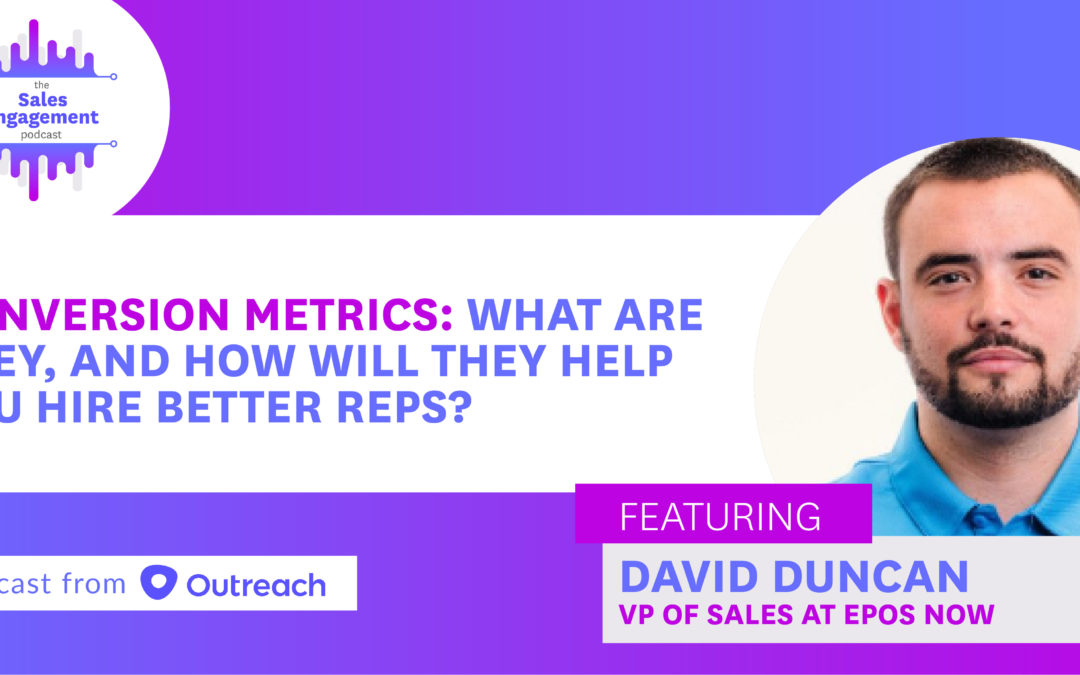 Conversion Metrics: What Are They, and How Will They Help You Hire Better Reps?

“How are you tracking your metrics?”

No matter which business you’re in, if you’re in the sales world, at some point you’ve had a discussion with someone about metrics.

How are you measuring success? What does it look like to blow expectations out of the water? How do you get more of your reps to perform that same way?

On this episode of The Sales Engagement Podcast, we sat down with David Duncan, VP of sales at Epos Now, to talk about, among other things, metrics, the most important things to measure, and how to ensure consistency with your reps.

What Metrics Are You Tracking?

Obviously, the metrics that you’re measuring are going to vary based on the field you’re working in, but as a general rule, David breaks metrics down into three categories:

Activity Metrics: These are the easy ones. These are calls, ops, demos, pipelines, those basic things that every sales rep is doing. They’re easily measurable, and if someone is struggling, easily fixable.

Conversion Metrics: When you talk about conversion, you’re talking about things like calls to lead in the first hour. Conversations that last more than 90 seconds. A lead to opportunity ratio of at least forty percent.

Cost Metrics: This is where the rubber meets the road. It’s all about cost per lead, cost per deal, and cost per demo.

What are you spending? Is it costing you more to feed your reps leads than they’re actually generating?

Then you may have a problem.

Play Fair with Your Reps

This may seem obvious to some, but far too many businesses run their sales departments like they’re picking football players on the playground.

Find the recipe that works, and then make sure everybody gets the same amount of leads from each source.

Because it forces you to run the team like a mini P&L. Particularly if you’re a young company with not a lot of revenue to fall back on, you’ve got to operate this way in order to make it.

The Most Important Metric

If only there were a straight answer to this question.

But at the end of the day, the number is the most important metric right? The problem is, there can be a litany of problems in the funnel that lead to that number being off.

The conversion metrics show you where the problem is.

How do you ensure that all of your reps are consistent in their approach? In the way that they approach the funnel?

First of all, set clear expectations from day 1.

Second, you’ve got to move away from a revenue culture.

That’s right. Because the problem with focusing solely on revenue is that it ends up being the top two or three reps doing whatever they want while the rest of the staff are in constant fear for their jobs if they don’t hit targets.

Just like black belts do the same warm-ups and exercises as the beginners, everybody should be operating on the same set of principles and processes.

Don’t worry about the underperformers. Those that really want to be there will rise to the top, because you can’t force someone to perform, no matter how good they are. If they don’t’ want to get better, they won’t.

You can’t always make people care. Sometimes they just don’t, and those aren’t the people you want on your team anyway.

This post is based on a podcast interview with David Duncan from Epos Now. To hear this episode, and many more like it, you can subscribe to The Sales Engagement Podcast.