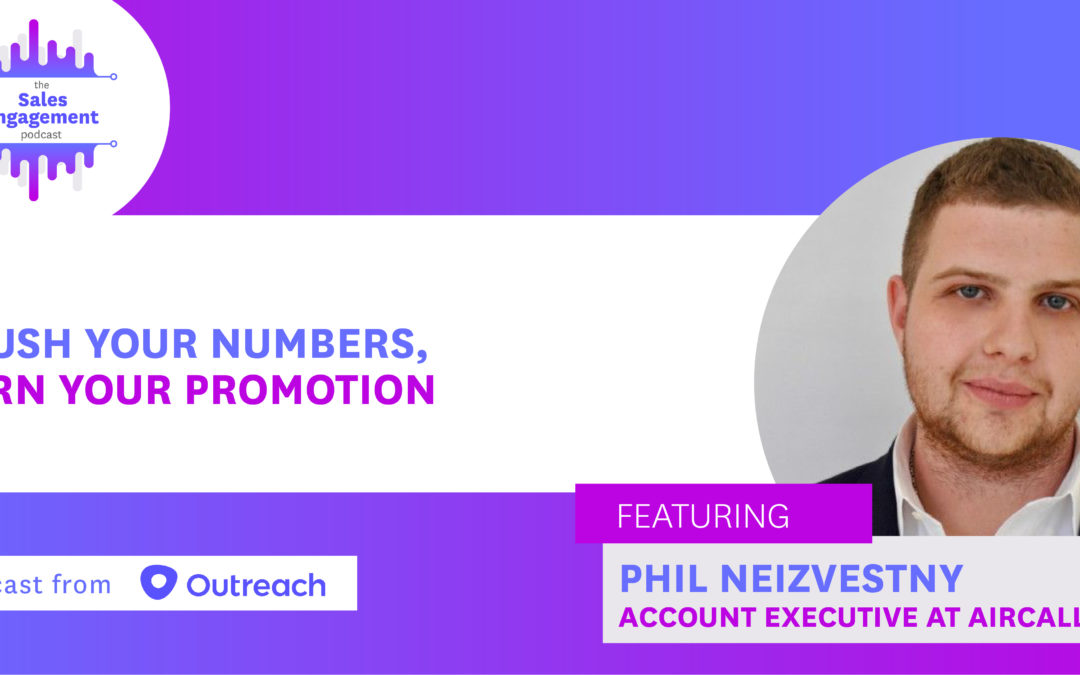 Crush Your Numbers, Earn Your Promotion

You tell your manager you want a promotion, but you’re forced to wait at least a year.

How do you make your metrics so compelling that you get your promotion early anyway?

I recently chatted with Phil Neizvestny, Account Executive at Aircall, about how being the #1 SDR earned him an unheard of promotion in less than a year.

(Actually, we met in Costa Rica while Phil was on a trip he won with honors at work.)

Phil earned a spot as an SDR after a cold calling session in which he got a booking in the last 2 minutes of his hour trial.

“As soon as I hung up that phone call, I had the entire office start clapping for me,” Phil said. “It was such an incredible feeling, and I felt empowered.”

Seriously, Phil broke his hand on a ski trip 2 weeks after he got hired. Had surgery on a Friday and was back in the office Tuesday.

“What took anyone 10 hours might take me 12 or 13 hours, but I didn’t care because I had this promise to deliver on,” Phil said.

In other words, you have to light a fire under your motivation.

“I sacrificed my weekends for the first 3 months,” Phil said. He opted to work from 8:00AM to noon every Saturday.

“I had 8 perfect months of quota from that time,” he said.

Phil figured out who the top performers were at the company and asked them a million questions.

“I really started to develop the skills of what it took to become a top performer,” he said.

Tip #4 — The one extra mentality

“What I did is have that ‘one extra’ mentality,” he said.

Don’t react to failures or roadblocks with fear. “Those mental blocks stop you from moving forward and progressing,” Phil said.

How to ask for a promotion

Phil knew that one of his 2019 goals was to become an account executive. It’s hard to approach leadership at a place where you’ve worked for less than a year and ask for a new job title.

Phil spoke with his manager and asked what he needed to do to meet his personal goals. He was told that he’d need to wait for a year.

(Of course, he was too driven to just leave it there.)

Go for the job

Phil saw an opportunity to demonstrate his leadership abilities in coaching a new class of SDRs. He knew leadership would appreciate this involvement because of his rank as top performer.

“Start doing the things that it takes to become that person at the next level,” he suggested. He started getting more responsibility little by little through his actions.

Find somebody that you can connect with on a one-to-one level, someone that understands your energy and gives you that same energy back.

“I knew mentors were going to elevate my game,” Phil said. “You obviously have to be active and looking for mentorship.”

Promotion boils down to performance

Ultimately, Phil credits his promotion to 2 things he did.

He kept crushing his numbers.

“Whatever the next person did, I was always doubling that,” he said. At the end of the day, he was still an SDR and had to throw himself completely into that role (just as he gives his everything to being an account executive).

If you’re hunting for a promotion, you can’t let your current role go by the wayside. Don’t stop smashing it as hard as you can.

He also paid attention to his metrics.

“I took a long look at all the opportunities that I’ve created, and I presented them a case that was very, very difficult to say, No, we’re not promoting you,” he said. “I just gave them all the right pieces.”

You have to learn how to build a solid business case and go through all the numbers. When you ask for a promotion ro a raise, you have to walk in with a very detailed business case.

Now that he’s met his goal, Phil set a new one. “While I may have proven myself as an SDR, everything I did in 2019 doesn’t matter anymore. I now need to restart that entire process at the beginning,” he said.

He’s reviewing his pipeline at 6:30 in the morning. He takes demos at 8:00. Anytime someone wants to see what Aircall has to offer, Phil says, Yep, I’ll do it.

“It all comes from that passion,” he said. “The hardest part of the day is getting out of bed, getting dressed, coming into the office, and showing up. If you already have accomplished that, why not give it everything that you have?”

If you only remember 3 things…

“Enjoy the moment,” Phil said. “Love every second of it, and be passionate about it because I promise you what you put in is what you’re going to get out.”

To continue this conversation with Phil, follow him on LinkedIn. (Oh, and P.S. he’s dying to give you an Aircall demo.)

For even more engaging sales conversations, you can subscribe to The Sales Engagement Podcast on Apple Podcasts, on Spotify, or on our website.