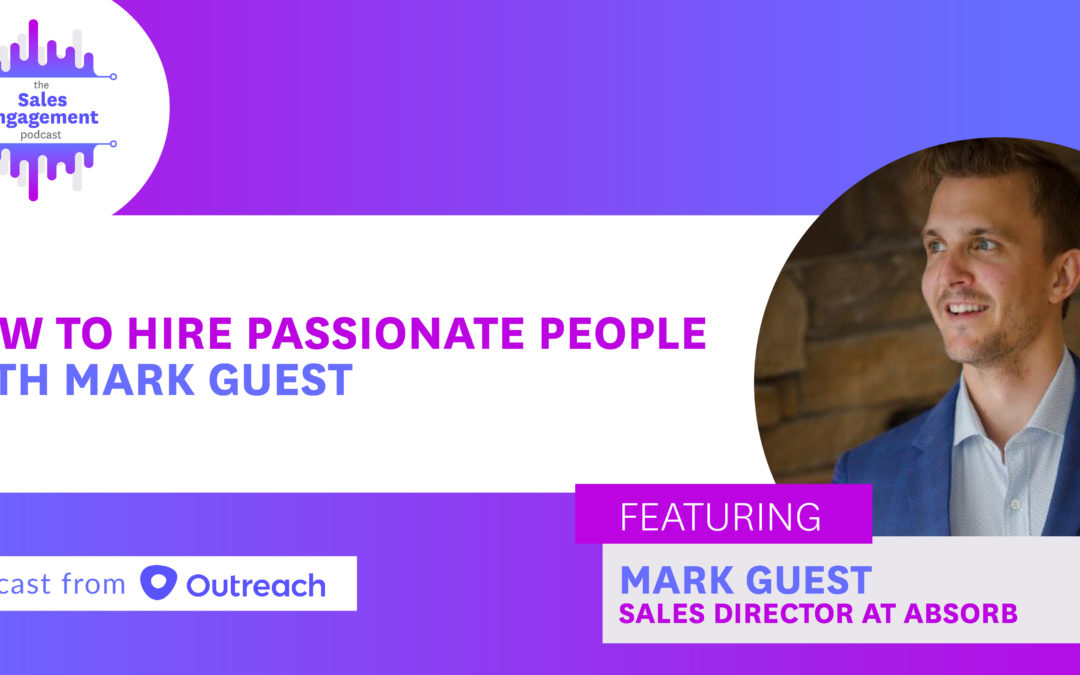 Hiring is one of the hardest things to get right at any organization.

Especially at a tech company in a small market.

No one knows that better than Mark Guest, the Sales Director at Absorb.

In this episode, Mark breaks down what he did in the early stages of Absorb’s hiring process to find great hires. With only a few other tech companies pulling in talent in Calgary, Mark had to get creative in order to find and attract the best talent.

When Mark Guest was first hired at Absorb to fill out their sales development team, there was one tiny problem. They were a small company in a small market.

He couldn’t necessarily go poach sales teams members at other companies, because most of the companies in Calgary had remote teams.

Because of the problems with size, there also weren’t a lot of events to attend that could help him.

After he had little success in posting job ads and trying normal means for finding new hires, he decided to get creative.

In order to fill their sales roles, he stopped using traditional means of recruitment.

Instead, he began to think outside of the box.

Mark was very intentional about the type of employee he wanted in his sales department. For instance, since Calgary wasn’t a big tech hub back then, he knew that anyone looking for a lot of notoriety and acclaim probably wasn’t going to want a sales role in a small industry. Using the powers of LinkedIn Sales Navigator, he was able to search for interests such as rare sports prowess or service industry experience.

Using this logic, he found people who were dedicated to things that not as many people care about.

This helped them to find some very successful people who were underserved in their current employment.

One thing that they really focus on is developing both professionally and personally. Podcasts, books, and other company incentivized resources help their hires to mature into more well-rounded people outside of the office.

In order to get everyone up to speed, it takes about 2-3 months for employees to be onboarded completely.

One of the main reasons that Absorb is able to get high performing talent is because of the way that they handle their recruitment process.

Their process is very diligent. Many of them aren’t even aware that working in tech is a possibility until they come across Mark and the team at Absorb.

What young hires want to know is that the organization is committed to people beyond the workplace.

Focusing on constantly having discussions about how the company can help them get there is key. It’s a huge part of how their company works, and why their employees are willing to take a risk in a new industry. Because of everyone’s close-knit involvement within the company, performance and growth go hand-in-hand.

In his two-step interview process, they want to see the passion in the first interview. In the second interview, Mark and someone on the SDR team to ask them questions. This lets them be completely transparent and it attracts very talented candidates.

So what attracts top talent to a place like Absorb?

According to Mark, the team does a great job of helping new hires keep options open. Meaning, that they have the flexibility to move into other roles in the company down the road. This means that all of their skillsets are transferable, and there is a lot of attention placed on developing strong mindsets within the company.

This process is constantly being improved by leadership as well.

Every meeting between Mark and the Head of Sales or CEO almost always involves talking about moving people up within the company.

With so much focus on how to make their employees better, it carries over into every other avenue of growth for the company.

With this type of mindset, it is very likely that Absorb will continue to grow in the years to come, because of the passion and enthusiasm that new hires bring to the company.