You want to build your brand on LinkedIn, but honestly you have no idea how.

The best way is to learn from someone who’s done it.

That’s why I’m excited to share my conversation with Sarah Brazier, Senior Sales Development Representative at Gong, who has grown her LinkedIn brand.

Before becoming an SDR, Sarah studied broadcast journalism and worked an actor and a teacher in the Bay area, so she has a breadth of experience to drawn on for her highly engaging LinkedIn profile.

Read on for her 6 tips for developing your LinkedIn brand. 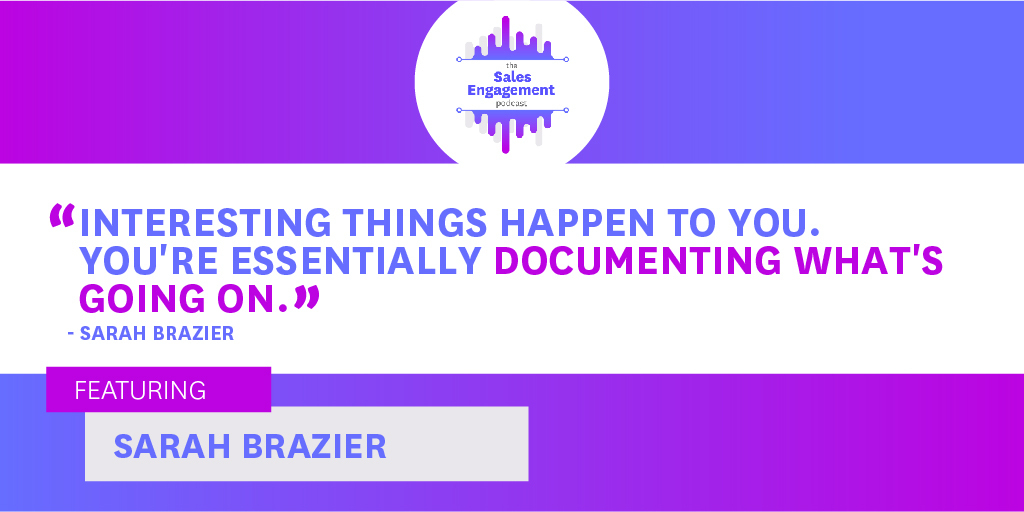 “Writing for the ear has been really helpful,” Sarah said. She pointed out that if you read a ton of outbound emails, you learn to distinguish between good and bad ones.

Same for reading of any kind, though she particularly recommends reading speeches.

“I spent a lot of time learning how to write in a way that’s digestible for an audience — you don’t want to have more than 15 words per sentence, things like that,” she said.

She also invested time in understanding engagement across different social media. “That was also an educational piece in terms of creating a brand on LinkedIn by figuring out what do people even want to hear,” she said.

Sarah draws a lot of her content from personal experience.

Her first viral post came about this way: A cold call with a VP of sales went really poorly. He hung up on her for a dumb reason. So she wrote a post about it.

“It just totally blew up. Somebodywho was influencer-status on LinkedIn commented on it, and it got a ton of traction,” she said.

Finding content isn’t too hard if you don’t overthink it.

“You’re just going about your day and interesting things happen to you. You’re essentially documenting what’s going on,” Sarah said.

Part of Gong’s brand identity is the concept of whimsy, so Sarah makes sure to find humor in her role of “getting yelled at and hung up on.”

Last week I interviewed Udi Lederger about brand building at Gong. He told me all about his encouragement for reps to develop personal brands online.

“Udi is all about embracing the person no matter who they are and supporting you in building out your brand, and if you want to build,” Sarah said.

Sarah posts if she feels like posting and doesn’t if she doesn’t. She loves Gong because they choose whimsical over serious.

When Sarah writes something that’s compelling to her, she wants it to be helpful to others.

She doesn’t obsess too much about spelling, but she does think about her approach to storytelling.

Sarah isn’t in marketing and doesn’t get paid per like. She has identified that her goal for developing her brand is to book meetings.

“I’m not validated by the amount of people who viewed my profile,” Sarah said. “I’m trying to book meetings. That’s my objective.”

She tries to post consistently as an exercise of creativity.

“That’s what having a brand on LinkedIn does specifically for me as an SDR. People are more willing to have a conversation,” she said.

Sarah’s profile has gotten her introduced to VPs of Sales in accounts that belong to someone else. She uses the opportunity to connect her colleague with the person chatting with her.

Sarah told 2 awesome stories about how she used her connections for good.

Sarah asked whether a Gong AE would have a conversation with a rep who was prospecting their account.

Sarah: This woman hopped on the phone with this guy for 15 minutes. She talked to him about Gong and the problems that he was having in his role. He got so excited about it. He introduced her to the director of sales at his company. That’s a 600-person company.

Another one. Sarah was on the phone for an hour with a CRO asking him about the weather in Texas and talking about being a teacher and being an executive.

Sarah: Then 45 minutes into the conversation I said something like, Your VP of Sales Operations requested a demo with us a couple of weeks ago, but we weren’t ever able to connect. Is that something that’s still on the radar for you guys?

They bought less than 30 days later.

The thing is, Sarah really wanted to know about the Texas forecast because she was going there shortly. “The key is to have a real conversation,” she said.

6. Play to your strengths

So, let’s say you aren’t a great writer.

“You either double down on something you’re already really good at or you strengthen the areas where you’re weak,” Sarah said.

You might be able to raise your weakness by, say 10%, but what if you could bulk out your strength by 500%?

You can see where this is going.

“If the SDR wants to build a brand on LinkedIn, they should do that. But I’ve also seen people post on LinkedIn and they don’t have the gift of copywriting,” she said.

Well… you might do better to invest in something that has a greater return on investment for you.

If you aren’t sure, give it a try.

“The only way to get better at building a brand on LinkedIn is to start attempting to build a brand on LinkedIn,” Sarah said. “Get feedback from people about what worked and what didn’t work. If you don’t do it, you’ll never know.”

For more engaging sales conversations, subscribe to The Sales Engagement Podcast on Apple Podcasts, on Spotify, or on our website.