Episode 143: How to Attract and Keep New SDR Talent 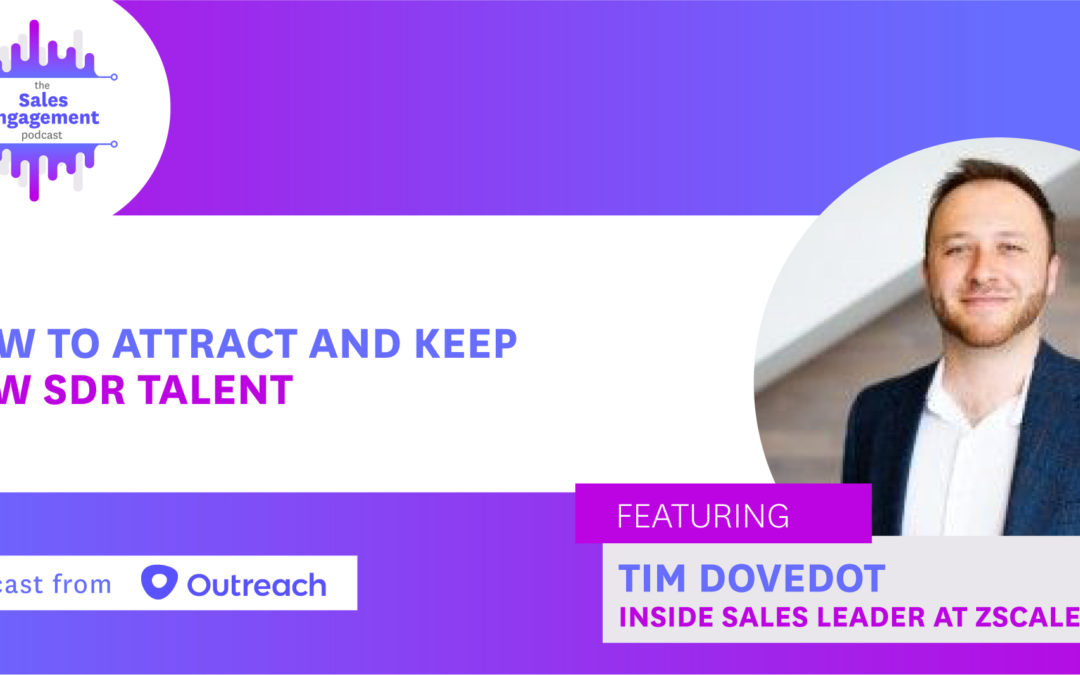 How to Attract and Keep New SDR Talent

And you look up and realize you’re not only doing sales but crushing sales.

I recently got to talk with Tim Dovedot, Inside Sales Leader at Zscaler, about training recent college grads who are opposed to sales careers. To Tim, anyone who says they really weren’t considering sales is ideal for sales success.

“When I was in college, I was doing sales in a retail job and I thought, There’s no way in the world I would want to do sales,” Tim said. He discovered that tech sales today is turning into a consultative world where sales is a partnership.

“There is no limitation on college graduates going into a sales career other than intelligence, curiosity, and character,” he said. “The sky’s the limit.”

The 2 ingredients for sales success

Tim grew up on sales jobs and had them all throughout college (but majored in psychology, not expecting to have a career in sales). “The whole time I thought, I don’t want to do sales, but here I was doing it,” Tim said.

Tim said that if your company is behind you, you’ll be set for success.

Anybody considering a career in sales should look for management that is directly involved in growing you professionally and personally. Especially investigate whether your direct first line managers are providing a high level of support to grow your career.

Next, consider what you’re doing in sales in that particular company. “It’s important for everybody to evaluate what they’re doing in a sales position in the company that you’re working for,” Tim said.

Ask yourself this: Are we looking at truly aligned company, from a higher level leadership down to the first line managers, that wants to invest in their sales development?

If so, you’ll see a focus on bringing in early talent and helping them grow.

So, if you don’t see those two traits, that’s cause for questioning why the investment and alignment isn’t there. 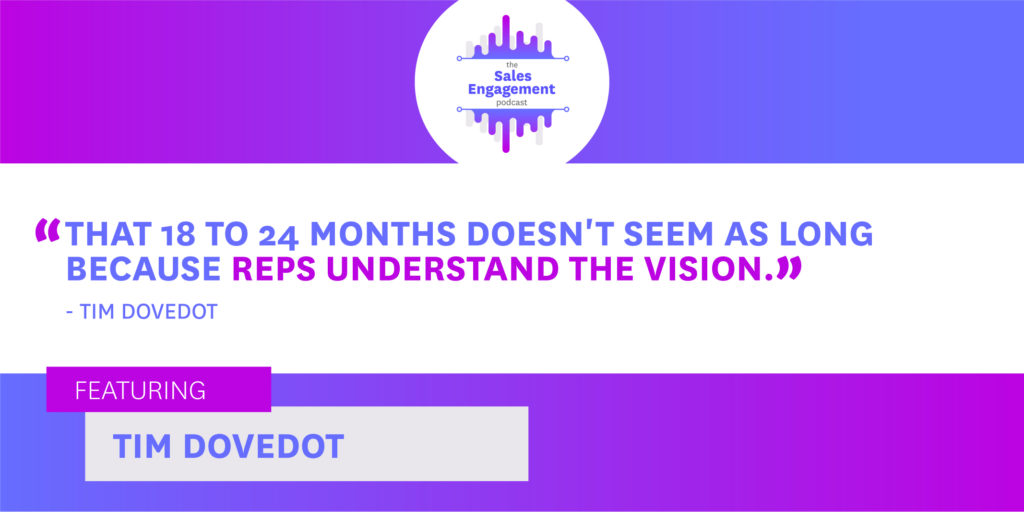 Let’s not improve people’s “weaknesses” so much as double down on their strengths.

“There’s a stigma around trying to make people mimic the top performers rather than trying to have people find their own voice and find what makes them successful,” Tim said. It’s really changed his perspective on how individual contributors approach their day to day.

“With the age of technology and all these different approaches for prospecting and sales in general, I don’t see why we try to make a one size fits all,” Tim said.

Let’s get underperformers to the same level performance as the top sales rep — by acknowledging they don’t have to get there in exactly the same way.

Oh, and frontline leaders need to sit down with reps on call blitz days and model how to get things done. (This is mutual — they can show successful techniques too.)

Tim told this great story about overcoming the barrier of the dial (and gaining some important street cred among his SDRs). Picture the October Month of Madness where the whole company was doing pipeline generation. “We had a very important week where we were dialing with the team a couple hours every day,” Tim said.

Having himself and the other sales development leader on the phones with the team brought energy and momentum to the week. It set the tone. “It was the best week we ever had. We scheduled over a hundred new business meetings in the enterprise segment,” he said.

People look at sales leaders who also sell with respect — and the understanding that their leading indicates what the guidelines are for activity. Plus, it was exciting to do all those blitz calls.

Something that sales leaders face is the problem of the revolving door. As soon as you train a great SDR, they go somewhere else. But Tim’s perspective isn’t that he’s losing all the college grads he’s trained — he relishes the legacy of sending them off into a further sales career.

“The focus of development early on is centered on process and really developing them personally and professionally,” Tim said.

The timeline is from one to two years, with an average of 18 months. The newest reps see others go through an extended period of training, ramping, onboarding, and a period when they’re hitting quota… and they understand that they’re here for the long haul.

Tim attributes his low attrition rate to reps understanding the depth of the product and appreciating all of the professional and personal development that Tim provides.

“It’s a really important thing to have the leadership bought into developing people, that’s when the reps buy into the long haul. That 18 to 24 months doesn’t seem as long because they understand the vision,” Tim said.

Reach out to Tim on LinkedIn and check out the sales development positions open at Zscaler careers.

For even more engaging sales conversations, you can subscribe to The Sales Engagement Podcast on Apple Podcasts, on Spotify, or on our website.