Episode 91: How to Become a Salesperson Who Reaches President’s Club Multiple Times 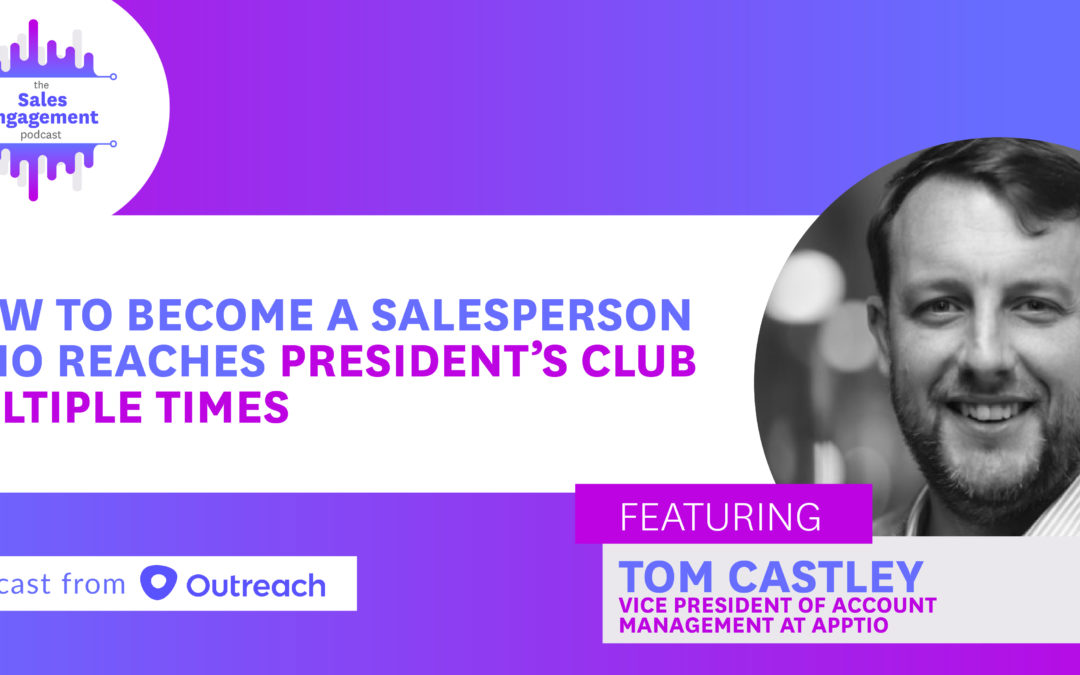 What would it take to reach the President’s club more than six times?

Tom Castley, VP of Account Management at Apptio, is one of those rare finds who’s actually lived it. He always worked in the software industry and held numerous leadership positions, but part of him always knew he’d end up in sales.

We’re so glad he did. Because now, we get to soak in the wealth of wisdom he’s gained on his journey to becoming a top 1% seller.

How To Reach President’s Club

In this instance, Tom talks about time as knowing when it’s the right moment to join a company or a particular market. No, it’s not witchcraft or fortune telling, it’s about being able to understand and notice trends of a total addressable market on the rise.

As a sales rep, he defines territory as being the total available market of buyers during his planned duration. So, while you need to pick the right time to join a company, you also need to make sure the territory you’re given has an available set of buyers.

This is somewhat linked to the territory. A small target in a large territory is a given, but the opposite is very difficult. When Tom starts thinking about his target, he immediately thinks about how many deals he needs to do and how much money he needs to drive, and if that’s all possible. Before accepting, he also thinks about what other people have done before to balance the territory and target.

This one you have the most control over because it’s all about you. The key question here is: How do I drive my ability to:

Too many sales reps only focus on their talent. And while that’s wildly important, you can’t become a top 1% seller without all four Ts.

Find your strengths, develop your skills, and then look to work for companies in that space. -Tome Castley

Time, territory and target, like we talked about earlier, is massively important. But you have the most control over developing yourself. Tom has taken over 45 courses on selling because he’s committed to constantly investing and training that muscle–and it shows.

To be a top 1% seller, you have to be constantly developing your skills. Selling today is very different from what it was 10 years ago. If you want to be different, you have honed those skills constantly and be ready to adapt.

“I’ve always been proud to say, as a sales rep, I never sold to anybody. They always bought from me. To get to President’s club, don’t confuse flapping wings with flying. It’s not about being busy, it’s about closing business and being ruthless and cutthroat in determining what you can close in your measurable time frame,” says Tom

Without hesitation, Tom says it’s time. And, it’s not the same time we spoke about earlier. It’s selling time. Time kills deals. When you’re ending a call, why is your go-to to schedule an in-person meeting the following week? Nobody likes to wait anymore. Why not meet them tomorrow or the day after? Cut the time in half between every activity you do and you will soon find that your sales cycles are half as long as they were previously.

More sales in less time? That’s a recipe for success.

In addition to quitting the bad habit of extending deals, Tom wants to challenge you to:

Understand the kind of deals you excel in and then get better at doing that. You have to know your stats to figure that out. How can you exercise your muscles if you don’t know these basic things?

There are two ways people typically handle the quotas they receive at the beginning of the year: 50% don’t do anything, and the other half divide their quota by the number of deals they need to do to reach their goal.

What if you started every deal twice as big as you were originally thinking? The average salesperson, when they get a new lead, will put a standard deal size into their CRM. Try supersizing it. Double your deal sizes and then double the pace at which you work.

President’s Club might seem completely unreachable. But it’s only impossible if you continue to work the way you’ve always worked. So, what will you be changing this week to get one step closer to that coveted title?