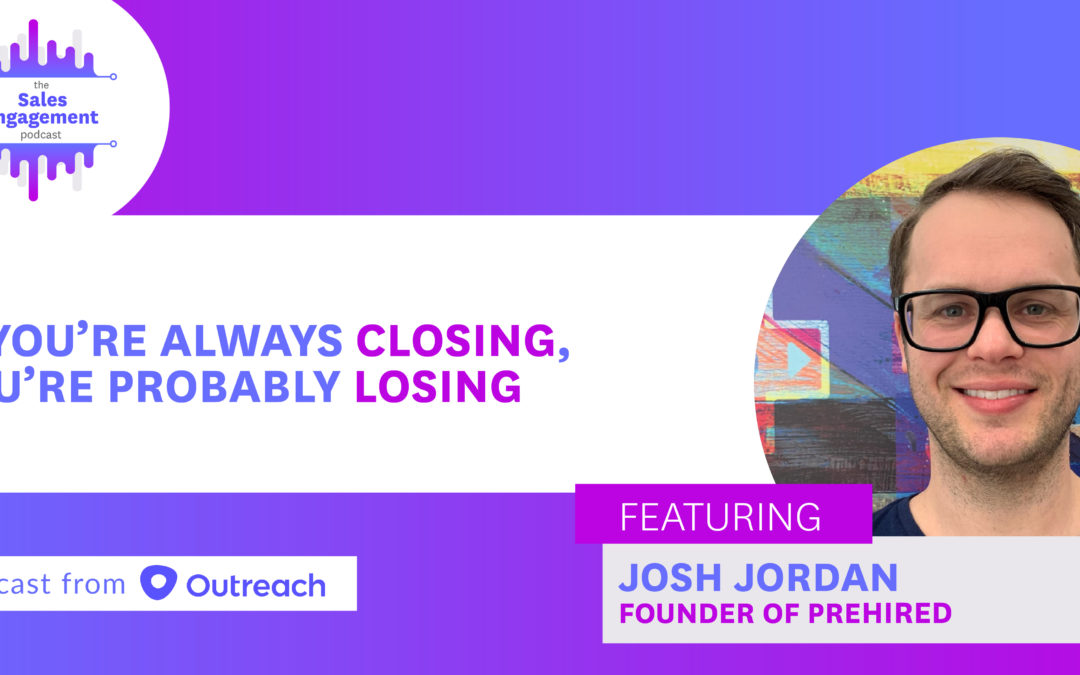 It’s a fun concept, a bit tongue-in-cheek. You close a deal, bump chests, and feel accomplished. The problem is, some salespeople actually mean it when they say “Always be closing.”

Instead, Josh Jordan, Founder of preHIRED, says you should “Always be clarifying.” It doesn’t matter if you close a deal if you don’t know why you did.

We recently interviewed him about the difference. Here’s what he had to say.

Always be closing is a concept that’s alive and well in sales today. But if you start off with this mindset, you’re going to lose a lot of deal.

Why? Because it’s a selfish mindset. It’s focused on what you can get from another person.

Always be clarifying, on the other hand, comes down to the answer to this question: Do you know why they did or did not buy?

Even if you successfully close the deal, and you can’t tell why, that means you were just an order taker and they were going to buy anyway.

How Do You Get Clarity?

Getting clarity from a buyer is simple. You can break it down into four components:

This is the simplest way to explain a sales process. If you do a good job as a sales rep, the ones who are a good fit with you will work with you, and those who aren’t will go somewhere else. That’s fine.

You don’t need to close someone you can’t help anyway.

Josh has had a lot of good managers in his career. He also had one who wasn’t.

At one point he was on a SaaS startup as one of the first sales hires. This particular manager was an interim sales manager. They had weekly meetings to go over their numbers.

Josh would confirm that he’d followed exactly what the manager had said to do, but he wasn’t hitting the quota. The input was correct, but the output wasn’t where it needed to be. What should he do?

The manager said, “Get back on the phone!”

Did you catch that? The manager’s answer to the fact that things weren’t working was to say, “Do more of the same.”

Some would call that the clinical definition of insanity.

Josh ended up leaving the company, and two and a half months later, it went out of business.

What Gets Measured Gets Mastered

More “hype” won’t lead to more sales if you don’t have clarity.

What gets measured gets mastered. Everything else is mediocre bullshit.

If you want to get really good at everything in the sales process, you’ve got to start measuring everything.

When Josh came up with his“science-based sales” methodology, it came from three areas:

From those, Josh developed three pillars of his training:

Most people glaze over the third pillar. But it doesn’t matter if you know how to overcome a few objections here and there . . .  if you don’t manage your time well and have a system or playbook for every scenario, you’re wasting time.

Check out the episode to hear Josh dive more into each of the pillars.

This post is based on a podcast interview with Josh Jordan from preHIRED. To hear this episode, and many more like it, you can subscribe to The Sales Engagement Podcast.