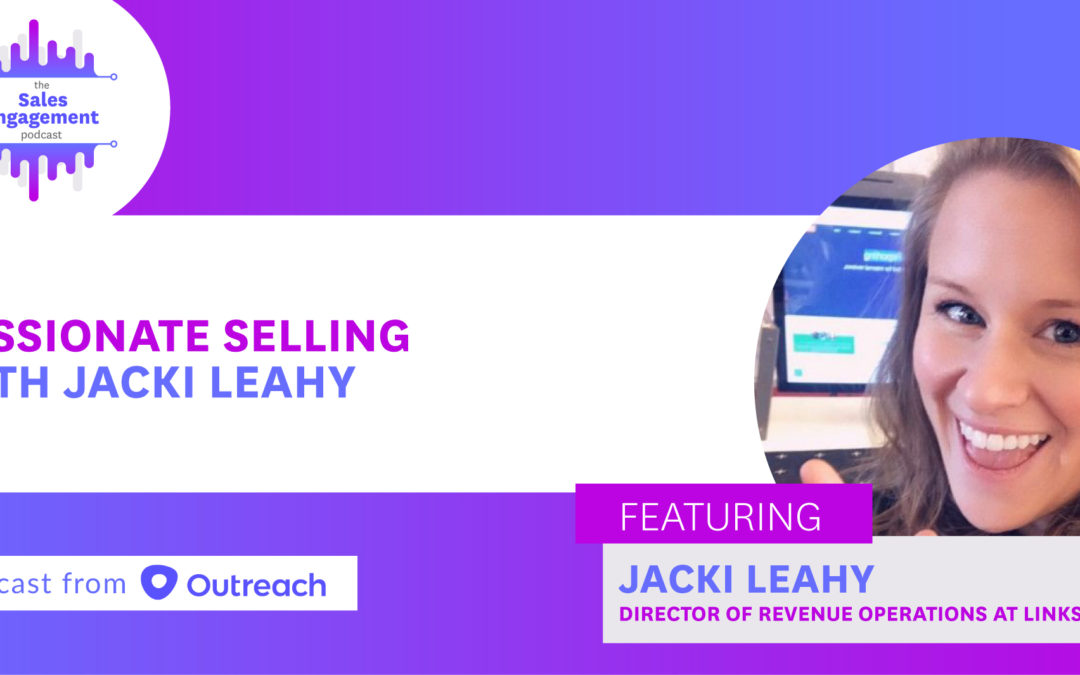 Selling is one of the most difficult things on the planet.

Most people can tell when they are being sold to and start to get upset, or get defensive.

However, imagine the difficulty of selling something cold where the prospect knows they are being sold almost immediately.

In order to excel in a difficult sales environment, it takes a lot of hustle, a lot of drive, and even more passion.

Jacki Leahy is a self-described weapon of friendliness, who has a personal mission to engage and interact with people–even when they hate being called on the phone.

Jacki was the number ten hire at LinkSquares an AI-powered contract management cloud service and continues to be a secret weapon to the company today.

She has an award-winning personality that allows her to be persistent even when customers hang up the phone, or get upset. Her experience as a sales guru has helped her to adopt an extraordinary set of principles that can help any salesperson no matter what they are selling.

One of the best aspects about her sales ability is that she has a deep curiosity about people and what makes them tick. Her unbridled enthusiasm makes her dangerous.

When Jacki is faced with a difficult call roster for the day, she and her coworkers start turning their to-do-list into a game.

The fun of breaking out of the box is enough to spur new creative ideas and relax them while they are on calls.

The gold standard for LinkSquares is ten calls per day and sales reps do as many dials as it takes to get there.

So why not make it fun and exciting?

Jacki and her team turn it into a game in order to take some of the pressure off of themselves.

For example, one day after spending some time on social media, she found that it was National Talk Like A Trucker Day.

She told a few coworkers in the morning, and by lunch they were trying to delicately weave truck driving lingo into their cold calls.

This helped her and the team to feel better about interrupting the days of the other people on the line, but more on that later.

Sales is by no means easy, and it can be a war of attrition.

The more you get ground down by failure, the more you have to be able to laugh them off.

For instance, the LinkSquares team have a Slack channel called “rejections” that lets them have fun and celebrate their most intense and crazy rejections.

It puts their failures into perspective and allows them to feel just a little more human about getting hung up on, screamed at, or even worse–being told “no.”

So how does Jacki make such a difficult job rewarding? She shares four points that anyone in sales can use for cold calling or other disciplines in order to make the process easier.

Jacki explains that over the years she’s broken her process down into four easy-to-follow steps.

In order to create a purpose she told me that you need to believe in the product that you are selling. When you have confidence in the team, your company, and the products that you sell it is very easy to feel in alignment with your purpose.

When you know your purpose, it makes it easier to face rejection.

If you don’t have a purpose, create one, because it will help you to keep going when you get discouraged.

Becoming okay with interrupting people is important to being successful in sales.

One of the most important factors in getting over fear is fully embracing the fact that you will be interrupting the customer’s day. Own it and explain to them why your call is important in an authentic, genuine way.

If you can’t do that, Jacki recommends not making the call, because you have to figure out your why first in order to be successful in cold-calling.

Of course it’s a bad time! Anyone that you are calling is a decision-maker, so own up to the fact that you are pestering them.

In order to become passionate about the value, you have to go in full force.

That means (if you are in a leadership role) hiring passionate people, and then letting them run with those passions.

Ask them what they are obsessed with, and learn what makes them excited. Help your sales team (or your colleagues if you are an employee) to tap into that passion to maximize their efforts.

In fact, she uses this to her advantage in her ask.

Her go to line is to ask the person on the other end of the phone, “does this sound like it would make a difference for you?”

Then, she anticipates their silence.

And finally (after patiently waiting) they either tell her that the timing is off, or they set up a call. Either way, reframing the conversation around making a difference for her customer is the gateway to building more rapport.

Remember, you don’t have to make sales calls like a truck driver, but you do need to have certainty about what you are selling, and that your call is worth interrupting someone’s day.