Episode 24: Why the Remote Office Makes More Sense Than You Think 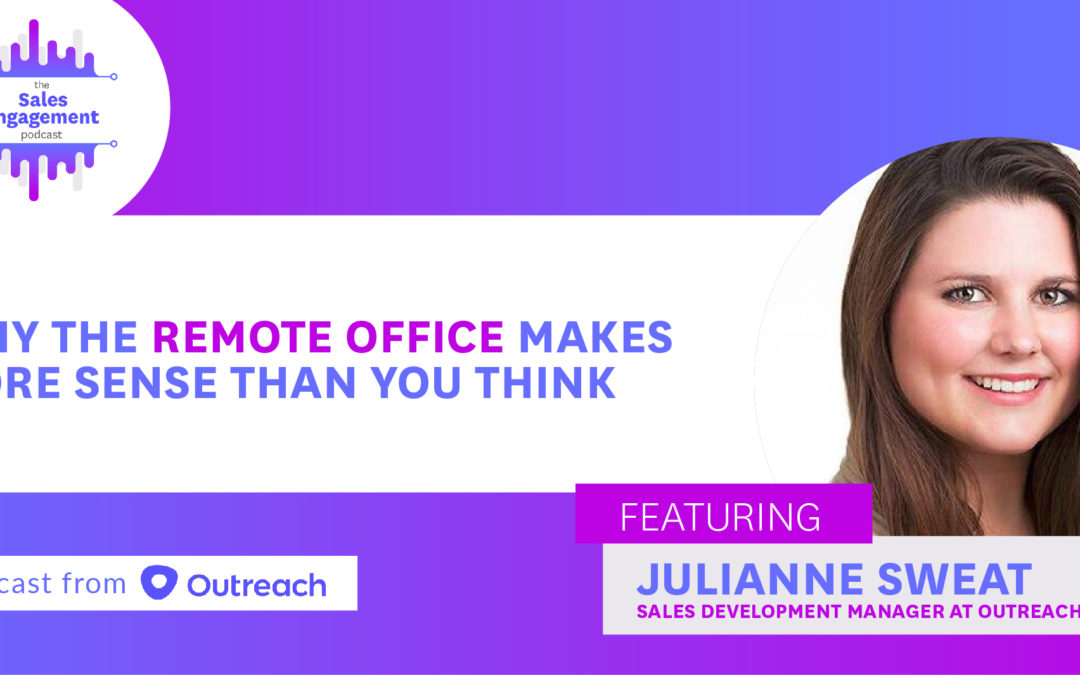 Why the Remote Office Makes More Sense than You Think

The world is changing, and with it, the way that we work.

The notion of one central office for everybody seems to be on its way out. Everybody commuting to headquarters from the far-flung corners of the area is an old and increasingly outdated idea. The remote office is becoming more and more mainstream. Most all of the large companies are putting down remote offices in places far from their headquarters. Amazon. AirBnB. Google. Nike. You name the company, they probably have a remote office.

The benefits of the remote office are more than we can name here. They can be more affordable, offer better tax incentives, and allow you to reach a different type of potential employee.

Julianne Sweat, Sales Development Manager at Outreach, and manager of the Tampa office was a guest on the podcast recently and had some great insight into some of the challenges, benefits, and advice that comes along with working in, or hiring for, a remote office.

Wear All the Hats

One of the biggest challenges in opening a remote office is that you’ll likely be doing so without a fully baked staff.

At headquarters, you’ve got entire product teams, IT support, HR professionals, and office managers. If it needs to be done, there’s probably someone whose main job it is to do it.

But in a remote office, often times employees end up wearing multiple hats, and as a result, learning how to do things that they never thought they’d be doing.

You might not have an entire moving team to set up everybody’s workstations. Or an IT administrator to get everybody up and running. Guess who’s in charge of doing those things? That’s right. You are.

Use Your Smaller Market

Let’s face it: As cool and hip as cities like Seattle, San Francisco, New York, and Austin are, not everybody wants to relocate to those places. They may be far away. They’re usually crowded. Real estate costs are rising, and the cost of living is not exactly cheap.

You can use your smaller market to really focus on attracting talent. Use the fact that the cost of living is far lower in Amarillo than it is in Portland. You’ll be amazed at how much people actually respond when you tell them you can pay them what they need, and that they’ll be saving an unheard of amount of money.

Lonely? Not Even a Little Bit

One of the very real concerns with a remote office is isolation.

How do you prevent your employees in those remote locations from feeling isolated? From feeling like they’re not part of the bigger team, or that they’re working in the JV office?

Technology can be great. It allows teams across the country or even the world to get nearly instant feedback and collaboration, allowing for a company to truly always be moving and always be innovating.

But when was the last time you were able to read someone’s body language or hear someone’s tone in a Slack message? Or an email?

Julianne’s advice? Put down the mouse and pick up the phone. Make a call. Hear someone’s actual voice.

At Outreach, they established an office exchange program, allowing for qualifying employees to, on the company’s dime, spend a week in either the Seattle or Tampa office.

When folks are in Orlando for a conference, they’ll go to the Tampa office and spend some time personally interacting with the folks there.

Being remote doesn’t have to mean being lonely.

Good for the Customers

The most responsive time of the day for prospects is the morning. If you’re in Seattle, that may mean your SDRs getting up at 4 to make those calls to New York or Boston.

But having an office in Tampa has allowed Outreach to be able to make those calls while allowing the Seattle office a little more work/life balance than having to wake up before the sun has even thought about getting up.

It’s a huge win and a huge benefit for the prospects.

You just have to figure it out. You will have fewer resources than headquarters. That’s a given. You won’t completely devoid of resources, but you will have less. You may not have anybody else to fall back on, and that can be a good thing.

Knowing when to ask for help is crucial, but so is getting to the point where you’re not beating yourself up for not having every single answer. You’re far more capable than you think.

This post is based on a podcast interview with Julianne Sweat from Outreach. To hear this episode, and many more like it, you can subscribe to The Sales Engagement Podcast.