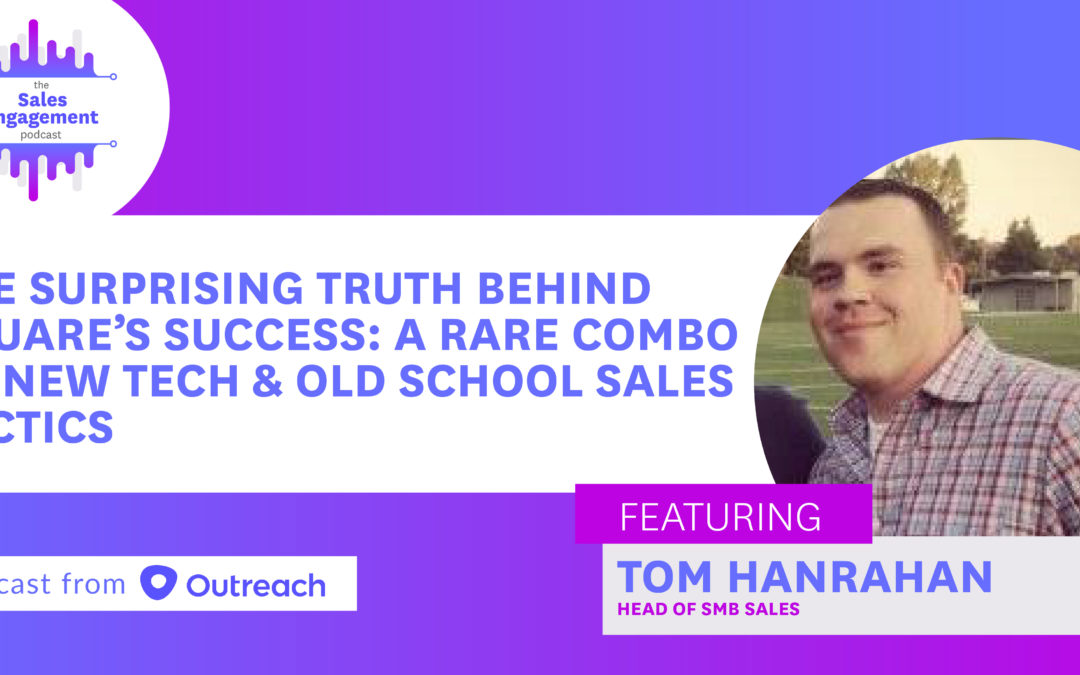 Square: It’s led by one of the great CEOs of our time, Jack Dorsey. On the surface, it can be easy to think Square’s moving at lightning speed, constantly creating technology that’s changing their industry.

But you’d also be right if you thought that they had an old-school sales mentality:  boots-on-the-ground, literally knocking-on-doors sales tactics. Somehow, they’ve combined both.

We know because we talked to the Head of SMB Sales, Tom Hanrahan. This guy’s an anomaly himself.

He started his sales career selling uniforms with Aramark before moving to NYC to work for LivingSocial as a Sales Leader. Next up was Seattle, with a small company named Amazon. Of course, he had a stint in Silicon Valley. But his next move was unexpected: He took up the Head of SMB Sales position for Square and moved to St. Louis.

Tom came on our Sales Engagement Podcast to share how Square is not only pushing the envelope in POS and credit card processing, but it’s revolutionizing every sales tactic, by inventing new ones and combining old ones.

Their sales teams borrow from every category but fit in none.

You have to check this out.

From our interview, I can tell you that everything Square does, at least on the sales side, seems to be a rare combination of Silicon Valley progressivism with Middle America tradition.

It’s difficult to wrap your head around that — I know. So let’s break it down into three categories. After all, it’s not every day you can commandeer sales strategy and tactics from a company led by the Jack Dorsey.

To start with, let’s check out the high-level of the sales team.

New School: Tom is the Head of SMB Sales. He’s lived in all the traditional tech cities: San Francisco, Seattle, NYC. He brings with him experience from plenty of the big names (Amazon, LivingSocial, etc.). He took off from the West Coast to lead the East Coast sales team in 2016.

As the sales team has grown the last several years he enables his team with the Challenger Sale, Objection training, and new certifications that are difficult to pass.

Old School: On the flip side, Tom’s office is in St. Louis, and that’s no accident. Square put an office there specifically because the talent pool was incredible — the city is full of people who show up ten minutes early, and leave at 5:30: sales types with old-fashioned work ethic, know how to handle typical sales objections, and have all the soft skills necessary for an SDR, BDR, or AE position.

New School: In a company like Square, they have exactly what you might expect: ambitious upstarts wanting to develop their career rapidly.

Tom mentioned one person on his sales team who came up from Support — he was the kid with the backward hat that Tom wasn’t too sure about until his Support manager told Tom “This kid’s going places.”

On the previous manager’s recommendation, Tom put him in a sales role, and within two years, he’s been promoted twice, is fast-tracked to a manager position, and has nearly tripled his income.

Old School: Tom also ensures that his team isn’t made up of individuals who want a promotion every 6-months or they’re gone (something very typical in Silicon Valley).

This goes back to the choice to open an office in St. Louis. Tom is proud to say that he has a good base of individuals who love their individual contributor position, and are dedicated to honing their craft and really developing within that position.

When it comes to the iteration of new products, and how they sell that product, it’s old meets new.

New School: Tom was stoked to talk about one of their newest products — Square Terminal. It’s an integrated payment processor with a touchscreen. As soon as it’s delivered, it has a full charge, so you literally push the only button on the device, and take payments immediately. Typical per Square, it’s rather revolutionary.

Old School: But how they’re selling Terminal is about as traditional as it gets: Tom has his NYC team literally knock on doors to show off the new product to Mom-and-Pop stores.

But it gets you thinking — What ways can all of us build up our sales teams with all the right pieces, re-using the old tactics that work, developing new strategies, all in an effort to create something truly innovative?

This post is based on a podcast interview with Tom Hanrahan. To hear this episode, and many more like it, you can subscribe to The Sales Engagement Podcast.