Episode 131: Tell the Truth on Social Media (& Watch as Your Personal Brand Grows) 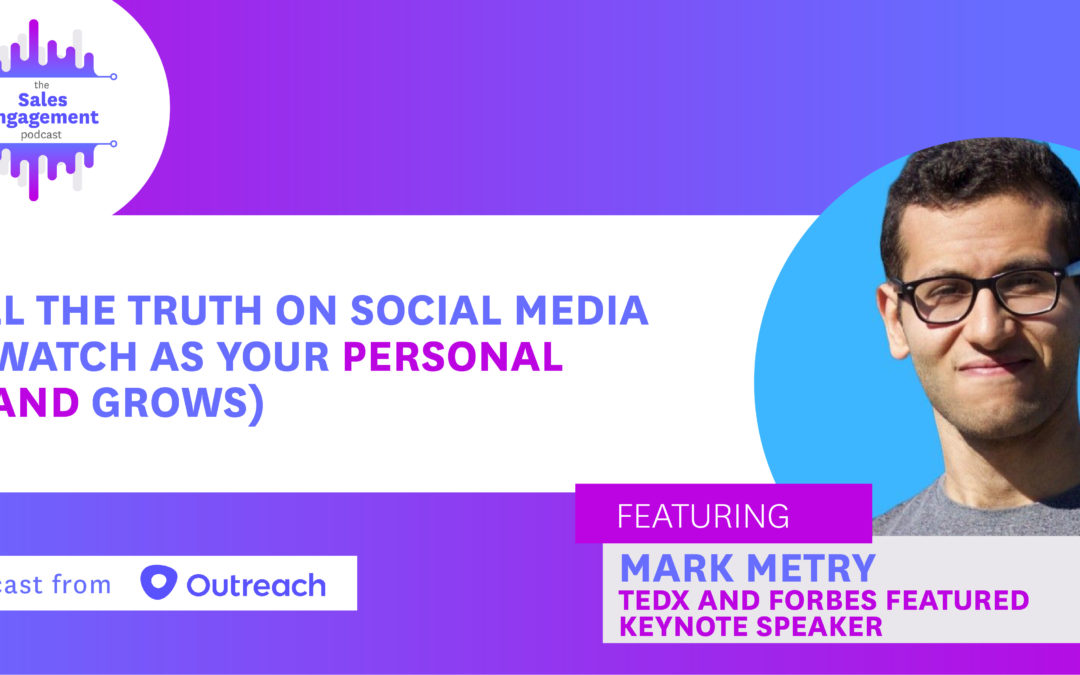 Branding in the 21st century comes with a unique set of challenges, particularly around social media.

Social media never had a slow acceptance into culture. It came like a tidal wave, washed over every aspect of our lives, upset the norm, and left us all without rules to  float and meander on a sea of undefined expectations, particularly for personal branding in our careers. Questions like these arise:

To answer these questions, I invited 22-year-old Mark Metry on the Sales Engagement podcast. Don’t be fooled by his age — he’s a podcast expert, a LinkedIn expert, a TEDx and Forbes featured keynote speaker, and he’ll even be featured on The Social Movement — an Amazon Prime docuseries. Here’s the highlights from that podcast interview:

The power of social media for personal branding (particularly LinkedIn)

Social Media is powerful, and, for business/career uses, LinkedIn is something that Mark particularly points to for his success. He said if he were going to make a list of the top 3 things that have helped him reach success, number 2 would be LInkedIn (right after “putting ideas into actions” as number 1).

LinkedIn has allowed Mark to “push and pull’ with his personal branding; he constantly posts content he believes is challenging, engaging, and relevant to his audience, and rarely asks for anything in return. Mostly, he’s simply sharing. From there, he’s been offered speaking gigs, his businesses have grown, partnerships have flourished, etc.

The sound of branding in the 21st century: podcasting

Mark has a global top 100 podcast, and he gives LinkedIn the credit for much of the success of his podcast, which in turn has fueled his personal branding and connections; his podcast is called Humans 2.0, and if you haven’t checked it out, do it.

He’s had plenty of high-caliber guests like Seth Godin and GaryVEE, but what really strikes me is that Mark goes after the “story behind the story” — he drives into, “What mindset has made you successful?”

Here’s what he’s learned from interviewing some of the worlds’ most successful individuals:

After interviewing dozens of the worlds’ most successful entrepreneurs, marketers, and thought leaders, Mark said he’s noticed that people who are truly successful value their “gifts” as if it they were someone else’s. They view their health, their brain, their spirituality, their family, their time, all with a sense of gratitude, as if they were stewarding those elements because they really belonged to someone else. Successful people believe it is their job to care for their gifts, and offer them to the world.

2 key elements of this ownership include:

1) Self-evolution: — Successful individuals do not  view themselves as a fixed product but rather as a product of constant evolution.

2)  Service: Most of these high caliber individuals believe it is their job to serve their fellow man.

Everyone struggles with self-doubt (even the greats)

From his experience with several of the greatest thinkers of our time, Mark’s noticed this: They’re real people. They have the same self-doubts and struggles we all have. He’s seen big names break down and cry right in front of him, and he’s learned that we all have to walk through the same struggle of convincing ourselves we’re worthy, we’re enough, and we’re worth loving.

Here’s what Mark believes the path to quieting the raging lions of self-doubt looks like:

Mark had a wakeup call in his early adult life — he was experiencing a modicum of success financially and in the business arena, but he was overweight, depressed, and  had no friends.

The inside and the outside were showing 2 different pictures, and everytime he engaged with the world on the outside, it was reinforcing his own self-doubt that he was a liar and wasn’t good enough, and no one really wanted to get to know the real Mark. That’s when it hit him:

If he didn’t get his personal life in order, there was no true success; and, eventually, it would catch up with him.

The world needs to hear the truth

The world doesn’t need perfect, it needs authenticity and vulnerability, and it needs the truth.

Something I personally learned while in the Amazon from a wise man is this:

“When you speak truth, you are giving others the gift of the present.”

When we engage on a truthful level, we encourage honesty and vulnerability from others, which pushes them to show us empathy, and be honest themselves, which, then does the same to us. It’s a beautiful cycle.

On the other end, lying creates a false reality, that, once given enough fodder, pushes the authentic you so far underneath the lies, the real you no longer has the potency it should. It’s difficult to know the real “you” any longer.

Final tip: Sharing defeats the power of your past

Lastly, something interesting happens when we get vulnerable, especially in public: The thing we were scared of, the thing we hated most about ourselves, once blasted out for the world to see, now loses its effect. It no longer has a grip on us. We’re free.

For more engaging sales conversations, you can subscribe to The Sales Engagement Podcast on Apple Podcasts, on Spotify, or on our website.