Episode 135: The Art and Science of Prospecting 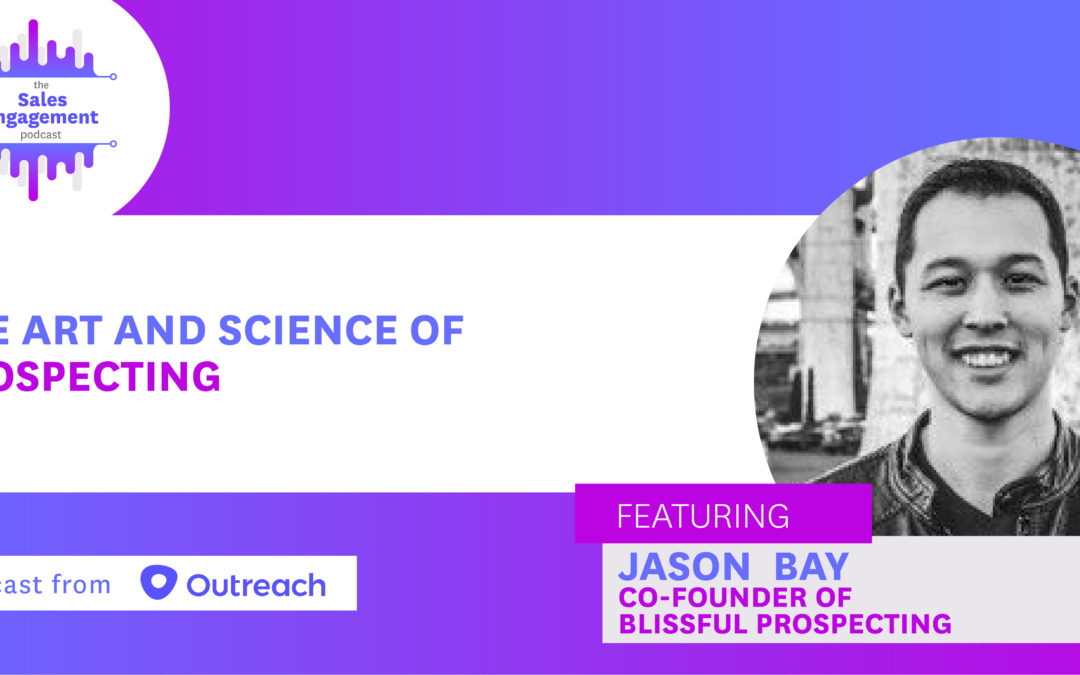 The Art and Science of Prospecting

What’s the one major thing your prospecting is missing? Empathy.

Bet you didn’t think that was the answer.

I recently got to interview Jason Bay, Co-Founder of Blissful Prospecting, about the art and science of prospecting.

Jason got his sales start in door to door sales (like I did) selling house painting services. He loved sales immediately and became a sales manager, then a VP of sales, then a marketing director, at various places before becoming a consultant and ultimately founding Blissful Prospecting.

“I get cold calls and they’re just terrible,” Jason said. “It’s me, me, me, me, me, and here’s why I’m reaching out and what I want from you. So the majority of sales organizations are not doing prospecting well.”

He and I talked about 3 big ideas involved in prospecting: empathy, REPLY, and pattern disruption. Let’s dive in.

The biggest mistake that sellers make is the complete lack of empathy.

“Empathy is a big part of a framework that we teach,” Jason said. But empathy doesn’t mean feeling the same emotion that another person is feeling (because then we’d both get frustrated and hang up).

“It’s being able to put yourself in their shoes and think about how what I’m doing might make them feel,” Jason clarified.

“It’s just being human,” Jason said. It’s talking about a person’s frustration or challenge that you can help them with.

Basically, leading with how you think you can help is an empathetic approach.

Read a cold email together.

Answer this question, “What do you think that the prospect would feel after reading this?”

Empathy is understanding why someone would feel this way. Sales will always benefit from increasing empathy.

Prospecting isn’t about using prescriptive ways of fixing your problems. Jason uses and teaches the REPLY method to apply to outbound messaging. It’s not an email template but rather a set of principles.

R is for Results

When you first get an email, you want to know what’s in it for you. Which means that sellers need to excite the prospect’s interest in the first 12 words (in an email) or the first 1-3 sentences (in a call).

“The big mistake I see people making at that stage is thinking that we have to sell our product or service in that first interaction,” Jason said. “We’re just trying to get their attention and to get them to think this looks interesting.”

In other words, keep it relevant and results-oriented.

E is for Empathy

Everything we said above about empathy applies, plus showing a prospect that you walk in their shoes by using language that they use.

“Lead with challenges, frustrations, that sort of thing — and use it in their words,” Jason suggested.

P is for Personalization

“The goal I think is to not only show that you’re a human and not a spammer, but to also show that your outreach was intentional,” Jason said.

It’s okay to do 2 hours of obsessive research to compose a 3-line email (Jason has, and he earned a meeting).

Basically, personalization means that you were thinking about that specific person when you were preparing to reach out, whether in writing or video or calling.

L is for Laser focus

The average attention span is less than 8 seconds. Talk about attention economy.

“You need to get your pitch out. Like, once you get to the pitch part of your cold call, you’ve got to get that thing out in 15 to 30 seconds,” Jason said.

Y is for You

Look at the last email you sent. Count the times you said “I” and “my” versus the number you used “you” and “your.”

“Make your prospect the hero,” Jason said. “It’s about making people that have really great products and services do better in whatever way that you can help them.”

If you’re like me, you have a special no-nonsense voice you use to answer the phone for cold calls. And it probably irritates you when the salesperson starts off chatty when you just want them to get to the point.

So, try getting to the point.

Jump straight from personalization to saying why you’re calling.

Getting out that personalization as soon as possible at the very, very top of the call is important, because that warms the cold call.

That in itself is a pattern interrupt.

But then to actually say straight out why you’re calling? Another expectation that you’ve just inverted.

Jason gave an example: “Hey Scott, Jason with Blissful Prospecting. Know I caught you right in the middle of something here, but the reason for my call was on LinkedIn, you wrote this awesome post on why salespeople need to think more like marketers and that really stuck out to me as something I’ve been trying to do. So the reason I was reaching out again was…”

Ask yourself this: How can I pattern interrupt on the first part of my cold calls?

Get in touch with Jason on Blissful Prospecting to find out more.

This post is based on a podcast interview with Jason Bay at Blissful Prospecting. To hear this episode, and many more like it, you can subscribe to The Sales Engagement Podcast.

If you don’t use Apple Podcasts, you can listen to every episode here.