Episode 110: The Power of Forecasting to Help Your Company Predict Success 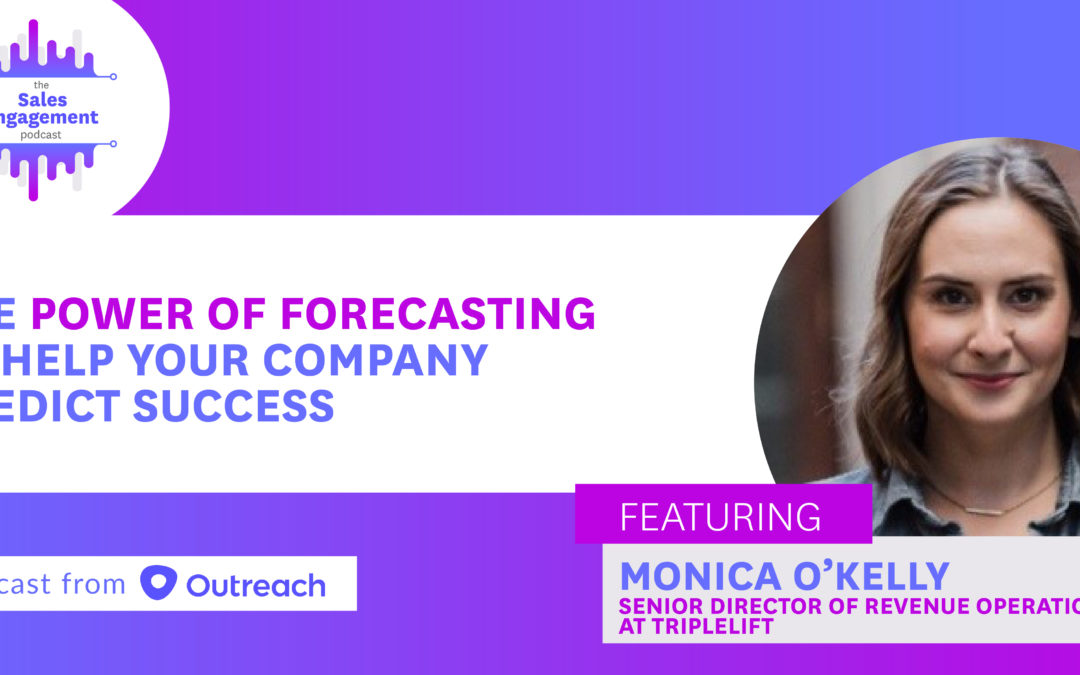 The Power of Forecasting to Help Your Company Predict Success

Predicting sales is an integral aspect of any business’s health.

This is even more true when you have multiple sales teams around the globe, all trying to predict what’s in their sales pipelines.

Enter in, this week’s guest on the Sales Engagement Podcast, Monica O’Kelly. Monica is the Senior Director of Revenue Operations at TripleLift, a company that helps advertisers with native advertising campaigns.

When Monica joined the team in 2017 in a sales planning role, one of the first things she wanted to address was managing global sales pipelines.

She knew that predicting revenue was critical to their success, and that their lack of forecasting was costing them big, so she suggested the creation of a new team.

Fast-forward to today, and her revenue functions team has been overseeing that function within the company for the past two-and-a-half years.

TripleLift was forecasting using an out of the box pipeline, and it didn’t give her enough information as to where their shortcomings were in pipeline management.

They developed a better way for forecasting, which gave sellers a lot more flexibility. This helped them with their path to goal, and involved rebuilding everything in Salesforce.

Integrating Salesforce as a key component in managing their pipeline combined with a nuanced approach led to TripleLift creating a better system for predicting business.

Their approach involved sellers reporting their predicted sales volumes for every quarter based on a three-tiered system called commit-probable-upside.

Commit – A conservative estimate of sales. This is guaranteed to the business.

Probable – This is the seller’s estimate as to how much he or she can sell.

Upside – This is a blue sky projection, based on every deal closing.

Sellers have reported that they are doing a better job of accurately depicting their numbers by using this formula for a realistic approach to forecasting.

She started by asking this simple question: how can we change the way that sellers functionally use salesforce and allow them to forecast more effectively and more accurately?

Reframing the conversation around what brands care about helped them to redefine how they think about business.

Now, each quarter they need to make only minimal adjustments to the pipeline in order to hit their quota each month.

Sellers can now put in their call number for what they are going to hit based on the three tiers outlined above.

Based on the traders that they partner with, sellers have reported that they are doing a better job of accurately depicting their numbers.

At what point does an emerging company know when to change protocol for forecasting?

One of Triple Lift’s major factors was leadership. Leadership had an enormous impact on making sure that the forecast they have in SalesForce is the best line of sight they have for seller driven revenue.

Monica cautions that when your sales team grows to a level that has too many people, (they are national and global) you have to build in rigor and structure. Otherwise, team members will be too spread out and won’t be able to police themselves.

One of the other primary drivers of their successful implementation was their need to forecast for new revenue models.

Having a class of new hires, overseeing new revenue models made it easy to pass off a new structure as if it was standard protocol. This helped with buy-in.

How do you manage change for existing employees?

Monica is a self-proclaimed change management nerd and credits their success at TripleLIft to willingness and preparation. These two keys helped with the transition more than anything else.

Monica asked her employees what they needed to make the sales experience great for them in order to help anticipate their future needs.

Getting them on board was really helpful for ensuring that they had buy-in across the board.

She set up one-on-one meetings that were in-person, as opposed to via video calls.

Monica explained that aligning team members was a big challenge in getting everyone on the same page.

This entire process of shifting how they forecast took about seven months from start to finish to implement the entire team forecasting on the commit-probable-upside framework.

Monica leaves us with these final words: don’t be afraid of change!

If you want to be successful in a competitive technology driven world, you need to embrace change and be willing to think outside-of-the-box.