Episode 19: How to Use Empathy to Break a Customer’s Armor 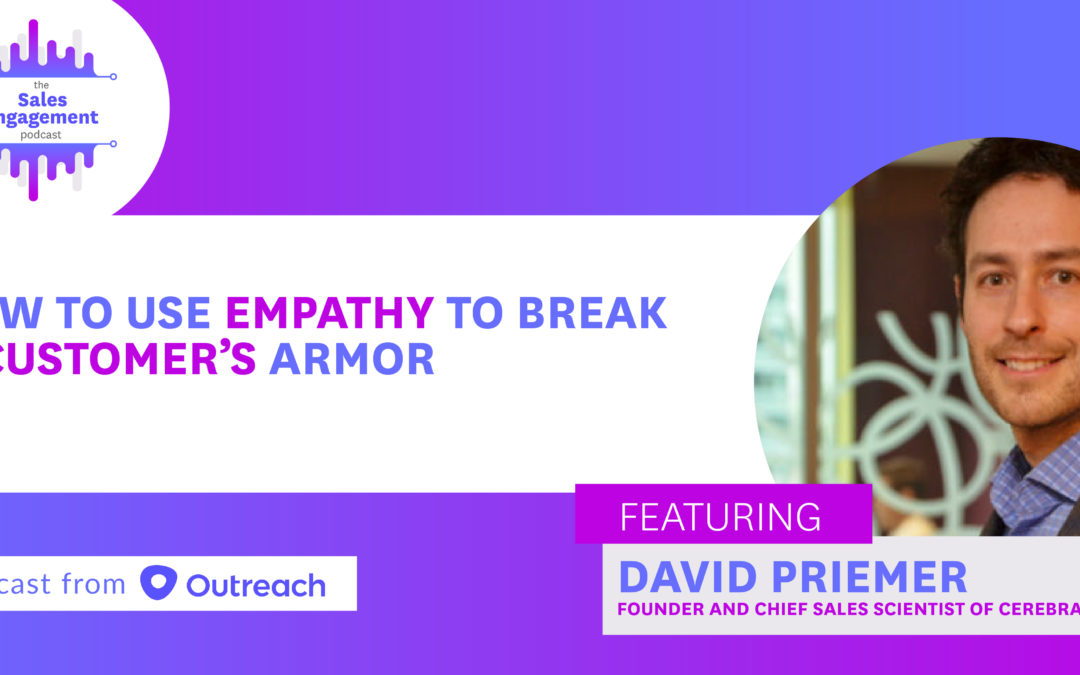 How to Use Empathy to Break a Customer’s Armor

What comes to mind when you think of salespeople?

Is it the used car salesman with his hair slicked back, desperate to get you into that car before you leave the lot today?

Or that snake oil salesman from decades ago traveling from town to town peddling something that he knows is a hoax?

We’ve become so resistant to pitches that as customers, we can sniff out a sales pitch from a mile away. So we’ve got to change the way that we sell. We’ve got to figure out how to break through the customer’s proverbial armor.

We’ve got to sell the way that we buy. However you would want to be sold to, that’s the way you should be selling.

Thankfully, David Priemer, Founder & Chief Sales Scientist at Cerebral Selling, was a guest on the Sales Engagement podcast recently and had a few thoughts on how to do just that.

How are you, as a company, taking a side, picking an enemy, and leading with that enemy to help your audience self-select.

Take Trunk Club. Trunk Club is an at-home clothing box. It’s curated monthly and sent to your door, and whatever you like, you keep. Whatever you don’t like, you send back.

Trunk Club was initially marketed to men who wanted to look good but hated going to the store. The enemy was the store. So Trunk Club identified the enemy, and it didn’t even really matter what was in the box. The presence of “the enemy” made people sit up and want to know more.

But if you’re a man who likes shopping, you’re probably not interested in Trunk Club, which is fantastic. They’re helping you decide what is right for you. By naming the enemy, they’re establishing their customer base.

Give Them an Alternative

But it’s not enough to simply name the enemy.

Think about a park. There are probably signs posted around the park that say something to the effect of, “Please pick up after your pet.”

But if you simply add a few words, it could change everything. If the signs instead read “Children play here. Please pick up after your pet,” you’ve all of a sudden given people an alternative. There’s a reason they should pick up after their pet.

The same is true for your company.

Lead with contrast. Lead with the alternative.

The Intoxication of Conviction

Have you ever listened to someone speak who seemed to know an awful lot about what they’re talking about? Think about an Apple press conference or a powerful motivational speaker.

There’s a reason that people like Tony Robbins get paid the money they do to speak. Because when they speak, people listen. Their persuasion and conviction are intoxicating.

When you approach your customers, can they feel that you’re passionate about what you do? Or do they feel like you’re bothering them?

If it’s rooted deeply enough, you can manifest it with conviction.

So in order to break the customer’s armor, so to speak, sell the way that you buy. Name the enemy, give them an alternative, and speak and operate with conviction.

If it wouldn’t work on you then don’t do it.

This post is based on a podcast interview with David Priemer from Cerebral Selling. To hear this episode, and many more like it, you can subscribe to The Sales Engagement Podcast.