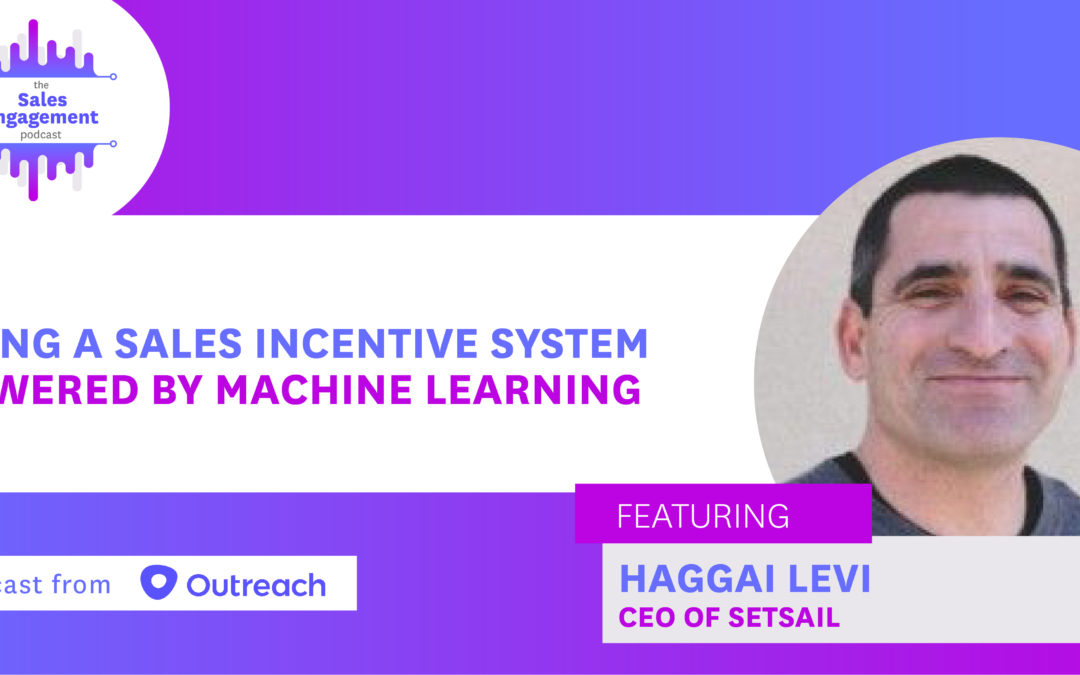 Haggai Levi began working at the juncture of sales incentives and machine learning at Google where he led teams of machine learning experts and data scientists to improve the company’s service productivity.

Haggai is now the CEO of SetSail, a company that provides AI-powered sales incentives. He and his team developed a machine learning powered sales incentive system that uses sophisticated rhythms to understand how much progress reps are making each week and to incentivize them on making good progress with deals the company cares about.

On this episode of The Sales Engagement Podcast, Haggai explains how a machine learning powered system improves the sales process.

You Built the Dashboard. Why Can’t You Move the Needle?

So incentivizing the right things is not really about technology. It’s a fundamental new behavior, a new process.

It’s a new way of thinking and a shift for salespeople because the world of sales incentives has always been the same. You close a deal, you get a commission. Close a deal, get commission. That was the way it always has been.

But not now. This is a new world.

How in this new world salespeople should be compensated?

“The key element is to identify with recall those key customer events that indicate that you’re going to close the deal or you’re close to closing,” Haggai said. You can then make sure to create those events. For example, if you knew that typically you needed to talk about pricing 30 days from the start of the sales cycle to close the deal, you’d do that. You just need to know.

Haggai’s system reapplies machine learning by looking at your historical data from your CRM as well as from emails, calendar, and everything else in your engagement data and map that to key events in your cycle.

On top of that, he’s created an incentive system that encourages reps to chase these key events.

A small company could enter and track the data in a massive Excel spreadsheet and use that to determine incentives. But Haggai’s product automates that process end-to-end  — from the machine learning that finds these events to tracking to the incentives.

Incentivize This, Not That

Here’s an example of how the process could work:

Let’s say you’re a sales leader wanting to incentivize key events instead of activities. You could take, let’s say, 5% of the commission away from just a close one. So they’re still getting paid, let’s say 10% on a closed one. The other 5% you’re dispersing through these key activities that happen.

Now, let’s say you get 2%. Once you have that discussion with the decision maker, then maybe we know that creating a mutual action plan and getting them to decide and sign off on that, that’s really important. So that’s 1%. And we know procurement is really important. There’s another 1%.

You’re you’re basically giving them like a trail of carrots instead of just one big carrot at the end.

Big important point here: Avoid incentivizing your reps’ activities. Try instead to incentivize those customer events you discovered were key.

“We tried that at Google,” Haggai said. “Incentivizing activities ending up just making a lot of noise in the system with not a lot of results.”

Be careful with all that paralysis by analysis.

“A good example that I like to use,” Haggai said, “is asking: what’s the percentage of the time my rep is talking in every conversation?”

Time a rep spends talking is not necessarily a causal effect on closing a deal. It’s probably correlative. In fact, most reps likely close more deals when they’re talking less. It’s not how much time they spend talking that results in a sale, anyway; it’s whom they’re with. An engaged buyer will make a decision to move forward.

“So be very careful with doing too much analysis,” Haggai said. “My argument is just focused on the basics. Try to find five to six metrics that you want to you want to track and just run with that.”

This post is based on a podcast interview with Haggai Levi, CEO of SetSail. To hear this episode, and many more like it, you can subscribe to The Sales Engagement Podcast.